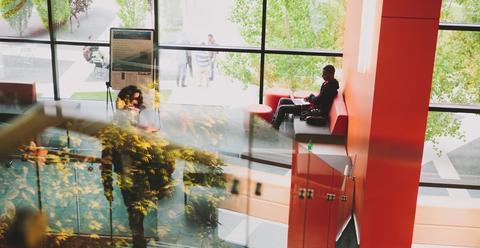 A decade into the 21st century,educational leaders at Sheridan College in Ontario, Canada saw the writing on the wall. Technology was eating up routine jobs. The traditional curriculum couldn’t guarantee work. They knew that to make students employable, they would need to teach creative thinking and creative problem solving skills. So they embraced a radical, new academic strategic plan to put creativity at the heart of the institution’s mission, marketing and curriculum. The goal was to create what Sheridan calls “the Creative Campus”—a place where “creativity is what makes us different.”

At the time, Sheridan was already home to a world-renowned arts and animation program that has turned out a long list of Oscar-winning alumni. Now the college wanted to take creativity beyond the arts. As one of Ontario’s leading post-secondary institutions with approximately 53,000 full- and part-time students in a broad range of educational programs, Sheridan wanted to extend its focus on creativity to the entire institution.

“In a world where business and society are both focused on innovation and change, creativity is the leading skill that people will need in order to adapt and succeed,” says Dr. Mary Preece, vice president and provost of the college, who led the creation of the new strategy.

While other schools have begun to dabble in creativity programs, few have taken Sheridan’s far-reaching approach. “The intention was to foster creativity across the entire spectrum of all our disciplines, all our courses, across the college—to not just have it in the arts, but everywhere,” says Preece. She aimed to make creativity a discipline in its own right: “Our institutional challenge was to make sure it’s not just a cliché—that we put legs under creativity so that it’s very real.

A Systematic Approach to Creativity

With that in mind, Sheridan College began working with Dr. Gerard Puccio, director of the International Center for Studies in Creativity and chairman of the Creative Studies department at Buffalo State College, the world’s first program to offer a Master of Science in creativity.

Puccio launched the academic initiative at Sheridan with a series of 3-day courses for teachers, staff and administrators. His extensive research led him to develop a thinking system that sparks creativity in individuals and drives innovation in teams and organizations. Known as FourSight, this approach teaches a simple 4-stage creative process with tools to support each stage; then it personalizes that process with an assessment that measures people’s unique thinking styles. By combining personal and process awareness, Puccio gives people not only a map for creative problem solving, but also a personal compass to help them navigate it.

As the training began, some participants were skeptical about whether it would be effective, or even relevant. But before long, says Iryna Molodecky, professor of advertising and creativity at Sheridan, “People found that it really worked, and it caught on. The user-friendly language of the FourSight approach provided a proven set of principles and tools that could easily support adoption and use across disciplines.”

In the first two years, nearly 300 faculty, staff and administrators went through the training. “Now, we have a common language around creativity that’s user-friendly and practical and can be easily taught,” says Molodecky. She continues, “The conversation about creativity has been able to grow and expand across the entire college. So creativity is no longer something that’s isolated ‘over there’ in one school. It doesn’t matter if you’re teaching math or art or business—you can still teach creatively and teach for creativity.

The effort has had what Mary Preece calls “a unifying effect.” Traditionally, different disciplines have different methods of inquiry, which creates silos, she explains: “The creative problem-solving methods that we’ve established help overcome those silos and create connections, because we’re all approaching creativity in the same way.”

The FourSight model has also had a profound impact at the individual level. “I find that it’s very useful in teaching my students,” says Molodecky. When students have to find a term project, she says, “I’m able to give them the tools to come up with ideas faster and more regularly. So, I’ve gone from just being the ‘sage on the stage’ standing in front the class lecturing to quickly getting into hands-on activity. And the students become truly engaged.”

For students, the college has developed a number of dedicated creative-thinking courses structured around FourSight, including a course on creative theory and practice in which students use the methodology to develop a new product. Overall, there are now about 700 students enrolled in creativity courses at any given time—and those courses are among the fastest to fill up, with most being 80 percent full within 24 hours of being opened.

A Culture of Creativity

Over the last three years, Sheridan has delivered on its promise to “put legs under creativity.” As a reporter in the Toronto Star wrote, the college has elevated creativity “to a calling; an actual creativity brand believed to be a first in North America.

Sheridan is a shining example that educational institutions who approach the subject of creativity with rigor and purpose can expect to see positive impact on a wide range of academic areas. Notes Mary Preece, “Sometimes people think of creativity as a whimsical or free-wheeling process, but it does not have to be that way.” Using the research-based curriculum that Puccio developed, she and her team at Sheridan are convinced: “Creativity really can be taught and developed.

By re-casting its strategic direction, Sheridan has fundamentally transformed itself in a few short years and given its students a key competitive advantage for the 21st century. As Preece explains: “We want every one of our students who is interviewed by a prospective employer to be recognized as a Sheridan graduate because of the way they represent themselves around creativity, and their focused ability to pursue creative approaches to problem-solving and innovation.”

Sarah Thurber is Managing Partner at FourSight. A speaker, author and thought leader in the field of creativity, she works in partnership with academic researchers, creativity trainers and designers to spearhead the development of online and print-based tools that support cognitive diversity and creative thinking.